Unlike all other well-known sightseeing sites in Hong Kong, Ha Pak Nai hides itself at the end of a narrow road, in a small village, in New Territories. The name sounds interesting in Chinese, it simply means ‘White Mud’.

The first destination which we arrived at is Lau Fau Shan, a small fishing village where some famous seafood restaurants are located. Along the old street there are many small stores selling dried fish, dried mussel and fruit. Then we saw a broad muddy beach at the end. Beyond the sea there is a large city Shenzhen, which is one of the most dynamic and noisy cities in China.

It is very cloudy day, but still sunny. The Sun was shining through plenty of tall buildings on the other side of the beach.

Two or three flat-bottom boats parked in the mud. People walked toward the centre of the sea and came back with fresh oysters. Then they open those hard-shelled oysters and sold the flesh to tourists.

One old lady was opening oysters using a special tool in her hand. And the tourists around were watching and waiting to buy oysters from her.

Li Xiaohu:  around 10 years ago, I ate lots of roasted oysters on the roadside in Sanya, it was only one RMB each.

Chen Tu: ……you must be dreaming

We took mini bus from Lau Fau Shan to Ha Pak Nai, the ‘White Mud’. When passing by the bridge connecting Hong Kong and mainland China, we realized that China is just right around the corner, could just go over if we had taken our passports with us^_^

The long bridge crosses over the sea and connects Hong Kong and China. Nearby, the remains of some old oyster rafts appeared on the wave.

We stayed in White Mud for the whole afternoon, watched the sunset, and the shades of sunset.

It’s nice place to take a break Saturday afternoon, for people who live in noisy and crowded Hong Kong. 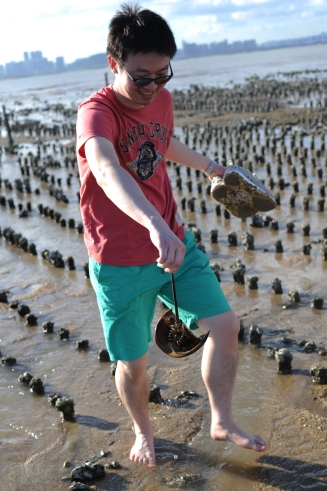 The ‘White Mud’ is broad enough and not really crowded. Some kids stood in the water and played little crabs.

Chen Tu also caught a weird creature in the water. It pretended to be dead when being flipped over by us. We let it go a few minutes later and some curious kids started chasing it immediately.

It is 2012. Summer ended here and Autumn is coming.